“Music gives soul to the universe, wings to the mind, flight to the imagination and life to everything.” - Plato

From “The Human Condition: A User’s Manual,” by Arnold Kunst
18 August
Arnold Kunst and the Piano, Part Two
In September 1964 when I arrived at Sonoma State [history major, music minor] I went to whatever the jobs-wanted office was called and filled out a generic job application form. I put down things like cutting lawns and washing dishes, but also put down something about teaching piano lessons to little kids [since I had already taught a good three lessons to the 5-year-old kid next door that previous summer, I considered myself a combat veteran].
I forgot all about it, but about a month later I got a call from that office and was told to contact this family near the college – the parents wanted music lessons for their two 9-year-old twins and had contacted the college to see if they could score cheaply with a music major. Or in my case, a music minor.
I never looked back. Before November was out I had 7 students, or 3.5 hours of teaching, and made out like a bandit. Go figure: I charged those 7 kids $2.50 for their weekly half-hour lessons [point of comparison: back then a pack of Marlborough cigarettes cost 25 cents].
My girl friend and I had a blast on the proceeds! 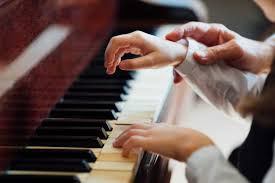 Posted by Lucid Speaker at 2:01 PM