“May your song always be sung.” - Anonymous

From “The Human Condition: A User’s Manual,” by Arnold Kunst


18 January:
Back in the 60’s I was in a Kingston-Trio type folk trio – we called ourselves “The Troubadours,” and we competed for Sonoma State University’s “Campus Talent ’65.” I played my guitar like a wooden Indian but had a pleasant tenor voice and did killer arrangements; the other guy had a croaky bass voice and couldn’t arrange himself out of a paper bag but whaled on a twelve-string; the girl couldn't hardly play her guitar and had a watery, nothing voice but was drop-dead gorgeous. In other words, we were nicely balanced. And as it happened we actually got a paid gig [our one and only] for the night just before the competition - provide 30 minutes’ entertainment on a Friday night for a Church Altar Society at a nearby motel for which we received the princely sum of $5.00 each plus a free dinner. We figured that worked out to about $.06 per hour. But by way of compensation, we were right at the boil for the competition the very next night. Hey, would you believe, we won first place!! 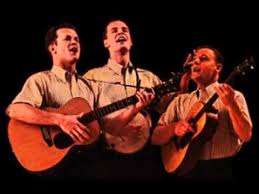 Posted by Lucid Speaker at 9:45 AM